Transition in the Easter Vigil

1 A Short History of the Easter Vigil to the Election of Eugenio Pacelli, 2 March 1939
James G. Leachman

2 The Pian Recovery of the Easter Vigil
Daniel P. McCarthy

4 The Structure of the Easter Vigil Liturgy
Patrick Regan

6 a The Liturgy of Light: The opening exhortation
James G. Leachman and Daniel P. McCarthy

6 b The blessing of fire and candle
Dominic Carey

7 The Prayers of the Vigil
Daniel P. McCarthy

9 The Prayer over the Offerings
Paul Turner

10 The Preface of the Eucharistic Prayer
Daniel P. McCarthy

In this book we seek to trace the process of human transformation in the sacraments of Christian initiation celebrated in the context of the Easter vigil, and from this to answer the question of what difference the Easter vigil makes in the life of one celebrating its rites.

The context of the year. The Easter vigil is situated at the heart of the liturgical year and contains the rites of initiation for those who have been prepared by the prayers and rites of the OICA. The phrase hanc sacratissimam noctem, “this most holy night”, of the Easter vigil’s collect is closely connected with that of the Christmas vigil, thus emphasising the unity of the paschal mystery that begins at the Annunciation and concludes with Pentecost. The phrase gloria dominicae resurrectionis illustras, “you illumine [this most holy night] with the glory of the dominical resurrection”, in the collects of both Christmas eve and the Easter vigil also links the mystery of the resurrection with that of the incarnation and the illumination of the elect by the words gloria and illustras.

The annual celebration of the liturgy first forms the people of God for service of others and of the world. The catechumens, for example are prepared for the sacraments of initiation, helped to take on a new vision and new values and, after initiation, are expected to give witness to their faith in the world of work.

Whereas baptism and confirmation are conferred only once, in the third part of the Easter vigil, the eucharist of the vigil’s fourth part is the repeatable sacrament of initiation, and this is celebrated anew each Sunday. Thus, in life and in worship God continually pours out life and love for the world, offering the divine self to us so that our fears of rejection be assuaged and we may respond, grow, change, and be converted, bathed, anointed and nourished to serve God’s world.

For our study we selected twenty-eight of the Easter vigil’s orations, a term which includes both prayers, exhortations and an address, so that these may provide a more comprehensive understanding of the entire rite than is possible with a study dedicated to only one of the major prayers. Because of their brevity, each oration is more accessible and manageable than the longer euchology, and their detailed study provides a rich appreciation of the rite, of its deep structure and of its dynamic thrust.

In certain cases an oration accompanies one of the longer prayers and so offers an interpretative key to understanding it; in other cases two orations frame a longer prayer and so provide an interpretative inclusion. This comprehensive perspective of the Easter vigil provided by the study of these orations will, we hope, provide a more complete understanding of the human transformation at the heart of this liturgy.

This volume consists of three parts. The first four chapters present the history of the Easter vigil and its current structure as renewed at the mandate first of Pope Pius XII and then of the Second Vatican Council. Chapter five presents the Latin prayers in a clear and honest English rendering. Chapters six to eleven present detailed studies of Easter vigil orations, and a summary concludes the volume.

These studies make several contributions to the ongoing conversation:

The source analysis and historical study reveal that the Easter vigil has been structured in a variety of ways, first according to distinct papal and parochial traditions of Rome, and then, when the distinction between the two was lost, the two traditions were amalgamated into a new synthesis. As liturgical scholars clarified this history, the reform prior to the Second Vatican Council led to an initial renewal of ancient practice in our own day.

The hermeneutical analysis of the renewed Latin liturgy of the Easter vigil reveals the dimension of Christian maturation by steps, just as we already began to show in the first volume of the series and elsewhere. The careful analysis of the grammatical and internal coherence of the euchology grounds the hermeneutical study in the Latin text of each oration.

The Easter vigil is the appropriate time for the celebration of the sacraments of initiation of adults. Just as we have studied the original Latin texts and discovered what difference the Easter vigil makes, it can be profitable for clergy, catechists and the candidates for baptism to consider the meaning of the orations about to be offered.

On Holy Saturday, at the end of many months of catechesis and preparation for Christian initiation, the elect may reflect on their own prolonged maturation in faith from their state as God-fearing enquirers to their present state as catechumens on the brink of being admitted to the number of the faithful. What hopes do they have for further change, what fears are to be overcome? What difference does it make for them to become a Christian according to the renewed Liturgy? After the experience of becoming Christians, the neophytes as indeed all of the faithful may take up these orations once again to prolong their reflection on the rites celebrated as part of their ongoing mystagogy to deepen their understanding of their dignity as becoming Christians.

As a result of this patient study, collaboration with others and meditation we have come to understand three ever deepening and interacting movements in the Easter vigil.

First in the orations we discern the self-revelation of God and the divine self-gift given first in the creation and especially in the Incarnation of the Word and the whole of Christ’s existence until his promised return. This continuous act of loving kindness elicits our response to that self-gift so that, receiving Christ, in the power of the Spirit we become Christian.
Catechumens preparing for baptism and those renewing the promises of their baptism come to see themselves differently as they mature and the whole person is transformed on the personal, ecclesial and social levels and they become different, even to themselves. Such transformation is both axiological and an ongoing process. By axiological transformation we understand a change of state such as a coming to birth or becoming children of God. By the ongoing process of maturation we understand a life-long process of coming to be what one has received in baptism. We see ourselves going on being reborn as new.Second, the response of believers to God’s initiative enables their self-transcendence and self-gift in baptism and, with further stages of self-transcendence, their gradual maturation all through life in service of God and of others.

The candidates and those already baptized receive illumination from the divine light — symbolized and mediated by the fire, the Easter candle, one’s own baptismal candle, the light of Easter day. They receive a new vesture and new identity in the community, symbolized by the stripping of the old self for baptism, the renunciation of the devil and the baptismal promises, the reception of the robe of glory in baptism, and of the baptismal garment. Thus they come to see themselves walking in newness of life. Such a new state of new personal identity enables self-reflection and thus, the development of an accurate self representation to oneself, to others in the assembly and to the world in which they live.

Third, the full and conscious participation of each member of the assembly leads to the consequence of the whole assembly’s growth in self understanding. Thus there develops a process of ecclesial or community self-transcendence and growth, and with that, a new and accurate self-representation of the assembly to itself and to the world. This maturation of the assembly is not only respectful of each one’s new identity — yet in communion — but also is generative of new members and new life to the world.

This second volume in the series, Liturgiam Aestimare : Appreciating the Liturgy, stands in the developing tradition of liturgical research and renewal. In this volume the authors, researchers from North and South America, Africa and Europe, continue to use the twin pillars of a patient and detailed study of Latin texts and the literary-critical methodology method as developed and taught at the Pontifical Institute of Liturgy.

We see ourselves in the same tradition of liturgical research as Abbot Fernand Cabrol and the monks of St Michael’s Abbey, Farnborough who, at the beginning of the twentieth century, contributed so much to the development of the research dimension of the classical liturgical movement.

We see ourselves too in continuity with Doms Leo Cunibert Mohlberg, Leo Eizenhofer and Peter Siffrin, of the former Institutum Liturgicum (1950-1967), Sant’Anselmo, Rome, who prepared for the liturgical renewal, which would be mandated by the Second Vatican Council, through their corpus of critical editions of ancient liturgical documents published in the corpus Rerum Ecclesiasticarum Documenta (RED). Third, we see ourselves in continuity with the methodology developed and used at the Pontificium Institutum Sacrae Liturgiae, established by Pope Blessed John XXIII 15 June 1962.

It has been a pleasure to meet and work with this varied and distinguished group of contributors from such different theological and cultural perspectives; and an honour to be able to offer these papers on Transition in the Vigil: Becoming Christians to a wider audience of those who in study or celebration enjoy Appreciating the Liturgy. 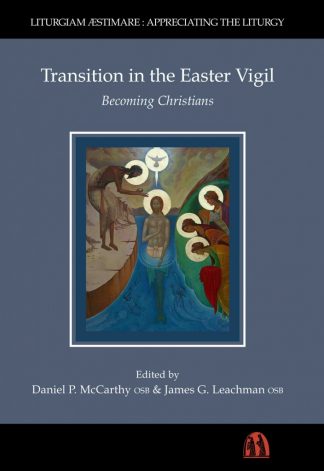 You're viewing: Transition in the Easter Vigil £30.95 incl. tax
Add to cart
We use cookies on our website to give you the most relevant experience by remembering your preferences and repeat visits. By clicking “Accept All”, you consent to the use of all the cookies. You may also visit "Cookie Settings" to provide a controlled consent.
Cookie SettingsAccept All
Manage consent