The Shroud of Turin

Have scientists proven that the Shroud of Turin is a medieval forgery? Although many people would say yes, historian C. Bernard Ruffin reveals recent scientific discoveries that indicate the controversial carbon 14 dating completed in 1988 may be inaccurate by as much as a thousand years! Utilizing fascinating new analyses of the time-honored relic, the author carefully and reverently looks at the facts surrounding the ancient cloth thought by many to be the burial shroud of Christ. In this new study, Ruffin presents evidence showing: Just what exactly does the Shroud look like? Why does the Shroud so fascinate both the theological and scientific communities? Where has the Shroud been housed througout the centuries? What studies have been done on the Shroud? What theories have been presented on the nature and origin of the Shroud? In addition to the scientific evidence, this compelling new study explains why crucifixion was the most horrific of all deaths, and traces the history of the Shroud, including evidence that the disciples themselves may have kept the cloth hidden. Examine the evidence and then decide for yourself … is the Shroud of Turin the burial cloth of Christ, or unprecedented forgery? 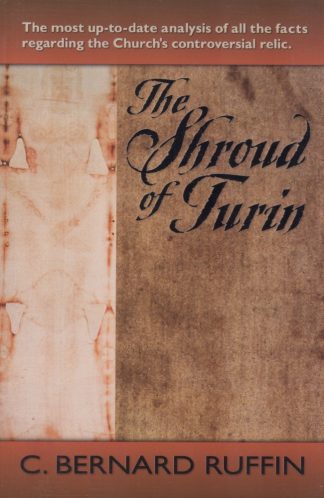 You're viewing: The Shroud of Turin £12.95 incl. tax
Add to cart
We use cookies on our website to give you the most relevant experience by remembering your preferences and repeat visits. By clicking “Accept All”, you consent to the use of all the cookies. You may also visit "Cookie Settings" to provide a controlled consent.
Cookie SettingsAccept All
Manage consent