The Modern Rite by Klaus Gamber

Collected Essays on the Reform of the Liturgy

“Gamber, with the vigilance of a true prophet and the courage of a true witness…thanks to his incredibly rich knowledge, indefatigably taught us about the living fullness of a true liturgy.” Joseph Cardinal Ratzinger

His essays consider: The Difficulties in Reforming the Liturgy; The Sacrifice of the Mass; Mass Facing the People; The Problem of the Vernacular; Criticism of the New Ordo Missae; The Changes to the Calendar of Saints; Liturgical Participation; Communion in the Hand; Making Worship Relevant; Continuity in Liturgical Development; An Ecumenical Liturgy for the Future.

Reviews
“eleven pungent, easy-to-read essays” Fr Peter Joseph, AD2000
“Klaus Gamber’s scholarly and prophetic insights into the problem of liturgical reform as displayed in this collection of essays are just as fresh and apposite today as they were thirty years ago.” Oriens
“If you are interested in Liturgy and an excellent historical perspective on current liturgical problems read this little book as it offers the careful reader a healthy dose of truth and common sense.” Homiletic and Pastoral Review
“Eleven essays which provide an invaluable resource for serious students of the liturgical revolution.” Michael Davies
“accessible essays”, “his critique is telling” New Directions 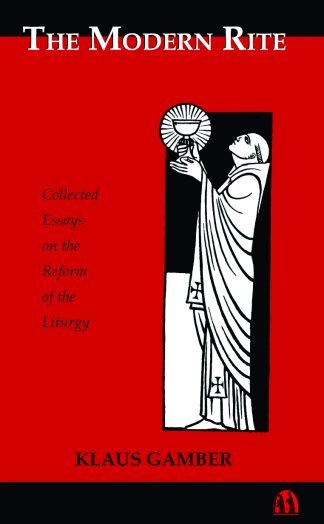 You're viewing: The Modern Rite by Klaus Gamber £9.95 incl. tax
Add to cart
We use cookies on our website to give you the most relevant experience by remembering your preferences and repeat visits. By clicking “Accept All”, you consent to the use of all the cookies. You may also visit "Cookie Settings" to provide a controlled consent.
Cookie SettingsAccept All
Manage consent