The English Jesuits from Campion to Martindale

Despite the rigorous and continued persecution of the Catholic Faith in England after the Reformation, the teaching and practices of the Church were deeply rooted in the history and hearts of the English people, and many remained loyal to it. Crucial to this achievement were the lives and work of generations of Jesuits of the English Provinces. English Jesuits had come back to their homeland in 1580 to work with the priests already there proclaiming, in Campion’s words, nothing but the truths their ancestors had taught. The English mission and Province was inspired and spiritually formed by Campion, martyred in 1581. Hope of bringing the faith back to England faded in 1688 when James II lost his throne. In 1829 the goverment recognized the Church once more, after nearly 300 hundred years of persecution. With the restoration of the hierarchy in 1850 the Church was fully home again; the sacrifice of the martyrs and the stoic courage of the recusants was fully vindicated. By 1880 the English Jesuits had opened nine schools for boys, thirty large city parishes and missions in Latin America and Central and South Africa. The 1914-1918 war ended the era of expansion but, between the wars the schools, parishes and other work were consolidated, while Heythrop College and the new Campion Hall in Oxford were established. The pattern of the Province’s work was changing, but down to the 1960s its ethos did not. Fr Bernard Basset, SJ was one of the best known and loved English Jesuits of the 1950s to the 1960s. Academically very able he, like Plater and Martindale before him, found the intellectual apostolate not his real calling. From the 1950s, he saw that this was to help the ordinary laity to better understand and live their faith. This he did, through the lay apostolate, in the Sodality and Cell movements, through parish work and as author, organizer, journalist and expert on the things of God – surrounded by the laughter and love of his friends. A true son of Ignatius, the book here abridged reflects the spirit of the man, the Society and the Province that he loved. 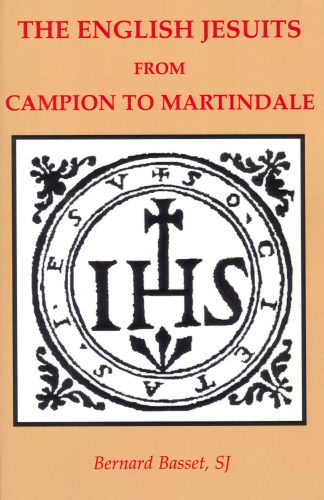 You're viewing: The English Jesuits from Campion to Martindale £9.99 incl. tax
Add to cart
We use cookies on our website to give you the most relevant experience by remembering your preferences and repeat visits. By clicking “Accept All”, you consent to the use of all the cookies. You may also visit "Cookie Settings" to provide a controlled consent.
Cookie SettingsAccept All
Manage consent