Saint Francis of the Seven Seas

This story from the popular Vision Books series of saints lives for youth 9 – 15 years old is about the inspiring life of the great missionary to the Far East, St. Francis Xavier. After his war torn boyhood in Navarre, Francis Xavier went to the University of Paris, determined to have a good time. He was interested in sports and became broad jumping champion of his college, and did not pay much attention to his studies. At first he scoffed at this fellow student, Ignatius Loyola, a former soldier who wanted to win the world for God. But Ignatius showed him that true champions are a far more heroic breed – those who risk their all to win the world for God. Francis joined Ignatius’ followers, and became one of the first members of the Society of Jesus.

Francis Xavier was selected by Ignatius to do missionary work in India. To all sixteenth-century travelers, a voyage from Portugal to India meant months of deadly peril from storms, pirates, and diseases. But to Father Francis Xavier, it also meant a chance to win the Orient for Jesus Christ. This great saint’s eagerness to spread the Word of God involved him with the pearl divers of the Indian coast, the natives of Malaya and the Spice Islands, the cannibals of Morotni and the hostile feudal lords of ancient Japan. This book captures the true spirit of a daring man who braved the many dangers of India and Japan in amazing adventures of courage and faith. 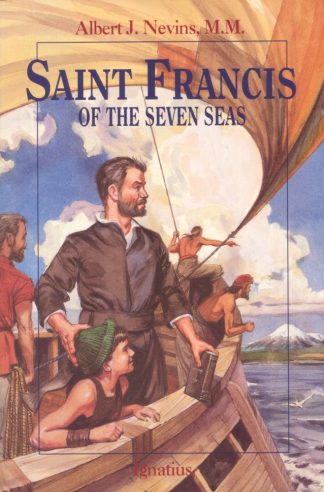 You're viewing: Saint Francis of the Seven Seas £7.50 incl. tax
Add to cart
We use cookies on our website to give you the most relevant experience by remembering your preferences and repeat visits. By clicking “Accept All”, you consent to the use of all the cookies. You may also visit "Cookie Settings" to provide a controlled consent.
Cookie SettingsAccept All
Manage consent