The unpublished Oratory Papers of Blessed John Henry Cardinal Newman edited with an Introductory Study on the Continuity between his Anglican and his Catholic Ministry. These are Newman’s Chapter Addresses and other writings on the purpose and characteristics of Oratorian life. As Superior, Newman wanted his community to consist of responsible persons bound together by tact and discretion, obeying an unwritten law of love. He exercised endless patience in his desire to preserve this ‘weaponless state’ of the Oratory in spite of tensions, dissensions, opposition and even separation. Each paper has been transcribed from the original manuscripts in the Birmingham Oratory Archives, and has been provided with a succinct introduction and notes. The editor has, moreover, furnished a full-length introductory study on Newman’s spirituality as a priest against the background of the Anglican Ministry (1824-45), since it is true to say that Newman learned to live as a priest while still an Anglican. Four major areas of his Anglican ministry – the Care of Souls, Preaching, the Eucharistic Ministry and Prayer – have been closely examined both in themselves and in their renewed appearance in Newman’s life as a Catholic priest. The editor, Fr Placid Murray, is a Benedictine monk of Glenstal Abbey, Ireland. 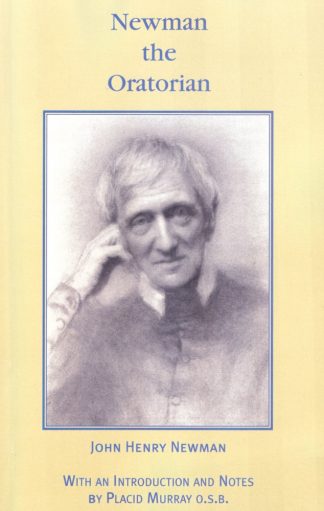 You're viewing: Newman the Oratorian £20.00 incl. tax
Add to cart
We use cookies on our website to give you the most relevant experience by remembering your preferences and repeat visits. By clicking “Accept All”, you consent to the use of all the cookies. You may also visit "Cookie Settings" to provide a controlled consent.
Cookie SettingsAccept All
Manage consent