From the famous Vision Books series of lives of saints for young people, this is the inspiring dramatic account of the colorful and courageous life and death of the martyr, St. Edmund Campion, “hero of God’s underground” during the persecutions of the Catholics in England in the 1500s.

Campion, the most celebrated young scholar of his day, was on his way to becoming the Archbishop of Canterbury until a crisis of conscience turned him back to his Catholic faith. He fled England, became a Jesuit priest, and was sent back to be the leader of the underground ministry to the persecuted Catholics until, after a long and frustrated search, the government finally captured him and brutally executed him. His daring and brilliant underground ministry to Catholics all over England, his zeal for the faith, and his great courage and joy in the face of martyrdom are all related in this compelling story for youth. 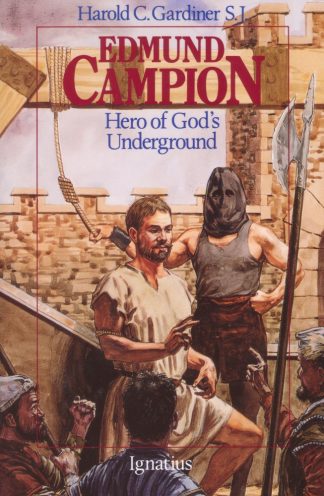 You're viewing: Edmund Campion: Hero of God’s Underground £9.99 incl. tax
Add to cart
We use cookies on our website to give you the most relevant experience by remembering your preferences and repeat visits. By clicking “Accept All”, you consent to the use of all the cookies. You may also visit "Cookie Settings" to provide a controlled consent.
Cookie SettingsAccept All
Manage consent